D A Y P A G E S is an exhibition at Bower Ashton Library, University of West England, Bristol, of volumes of my daily collaged diary, and a range of recently printed collaged books.

The Saint on the radio reminds me of The Saint on TV with Roger Moore, and also the series The Persuaders with Moore and Tony Curtis. Curtis was married to Christine Kaufman, a friend of Joseph Cornell I think he made a ‘box’ for her. Picked up Metros from station – a yellow concrete mixer with ACE written on it in bright red – a yellow sign which reads Car Wash 7 Days A Week – a parakeet on Nunhead Green.

This is part of the first D A Y P A G E entry, dated 23 February 2015. Cornell was very much in my mind having just read Dreams, a collection of his dreams, and having found on Deptford Market a film magazine with a photograph of Curtis and Kaufman with their baby. In deciding to keep a daily collaged visual diary I was, of course, tipping my hat towards Cornell.

I regret not having kept a diary before. There were brief episodes when I did. But nothing consistent. Now I find a degree of comfort in keeping a diary. It has become a consistent and reassuring part of what I do each day – I can’t imagine NOT keeping a dairy. Furthermore reading it tells me what I did on a particular day, a way of preserving memories of the past. With D A Y P A G E S I decided that the text would be typed, and I would include only images that referred directly to events of that day. Occasionally, I know I have an image that would fit the entry, as with the entry above – a parakeet – and will include it, but I dont ever go about trying to find an image, as that starts to approach a more conscious, and deliberate ‘picture making’ rather than using materials that arise each day.

I think it is the use of visual material that maintains my interest in this project. Keeping a text only diary doesn’t particularly interest me. I like the varying sources of images – the free Metro newspaper provides the majority of these. I also include till receipts, gallery handouts, paper bags, and fast food delivery leaflets sometimes typing directly onto these. I use two typewriters – an Olympia Werke Ag Wilhelmshaven – a beast of a machine from a cat rescue charity shop in Walthamstow – for use at home, and a portable Empire Corona De Luxe, which I use when I am away from home. I tend to be an imperfect typist, so words are often misspelt, or I forget to add the space between words – this can throw up unusual word combinations.

Each D A Y P A G E entry is collaged onto a page, occasionally two pages of a book, usually a scrapbook – I also use large music stave books, ledgers, stamp albums, even a concertina drawing book – I particularly like using partially filled scrapbooks which I find here and there, adding my diary entry to the items already pasted on the page, enjoying the unpredictability of these juxtapositions, and the feeling of adding one layer of time to another.

I try to vary the size and type of books I use for the D A Y P A G E S, this creatively ‘keeps me on my toes’ and not to repeat a well practised and predictable look, which, I am cautious of, and would occur more readily if using the same size and type of book. This attempt to keep the making of the pages ‘fresh’ is maintained by how the pages are made, usually starting by pasting any images onto the page, then typing and cutting out the text, all without planning how things will be spaced out. The challenge is then to arrange the text around / over the images so that it all fits. Most times there is an almost uncanny bringing together – everything comes together – though I also enjoy when this doesn’t happen and I have to find spaces for the text to go.

A  D A Y P A G E might record daily activities, thoughts, conversations, my studio work, a recipe, a response to an exhibition, a sports item (particularly about Leeds United) or a news story. I have found that a news story or event often ‘stretches’ across days, even months. Becoming a running theme to the entries. For example the death of David Bowie. The D A Y P A G E S leading up to his death, have newspaper items about the forthcoming release of Blackstar – his last album. Days later, the news of death, and continually since then the many responses to his death. Yesterday’s entry has a picture cut from The Observer of the musician Moby with Bowie. Close friends, Bowie one day gave Moby the hat he wore in The Man Who Fell To Earth.

I sometimes wonder what it might be like to produce D A Y P A G E S that record everything . . . recording every possible thing that occurs during just one day – an impossibility of course – an endless Proustian task, and how big would the page need to be ? 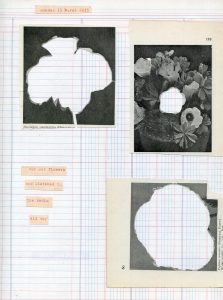 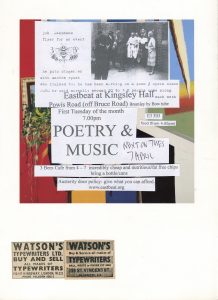 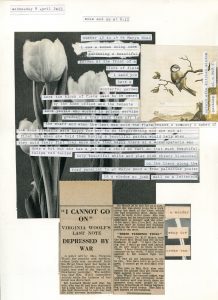 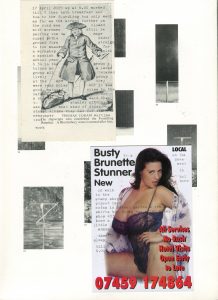 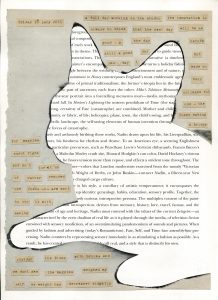 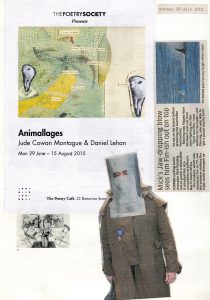