Liverpool Book Art celebrates the 200th Anniversary of the publication of Mary Shelley’s Frankenstein with two exhibitions – at the Central Library, Liverpool from 14 May to 9 August 2018, and at the Kirby Gallery, Knowsley from 17 September 2018 to 26 January 2019. A framed collage is included in both exhibitions and also two copies of my book RINFANTENESK.

The framed work is made from phrases cut from Frankenstein, and takes the form of a letter addressed to John Melbourne Esq, a character in the novel. The text is pasted on to a photograph from Au Coeur De L’Antarctique, (Librairie Hachette Et Cie, 1911) a battered book I bought in Paris for 4 euros, which documents Shackelton’s Antarctic Expeditions.

Copies of these will be stocked on my table at the forthcoming Liverpool Book Fair held also at the Central Library Liverpool over the weekend of 7 and 8 July. 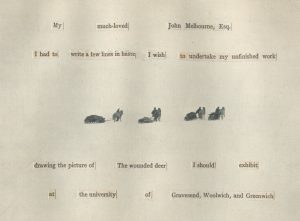